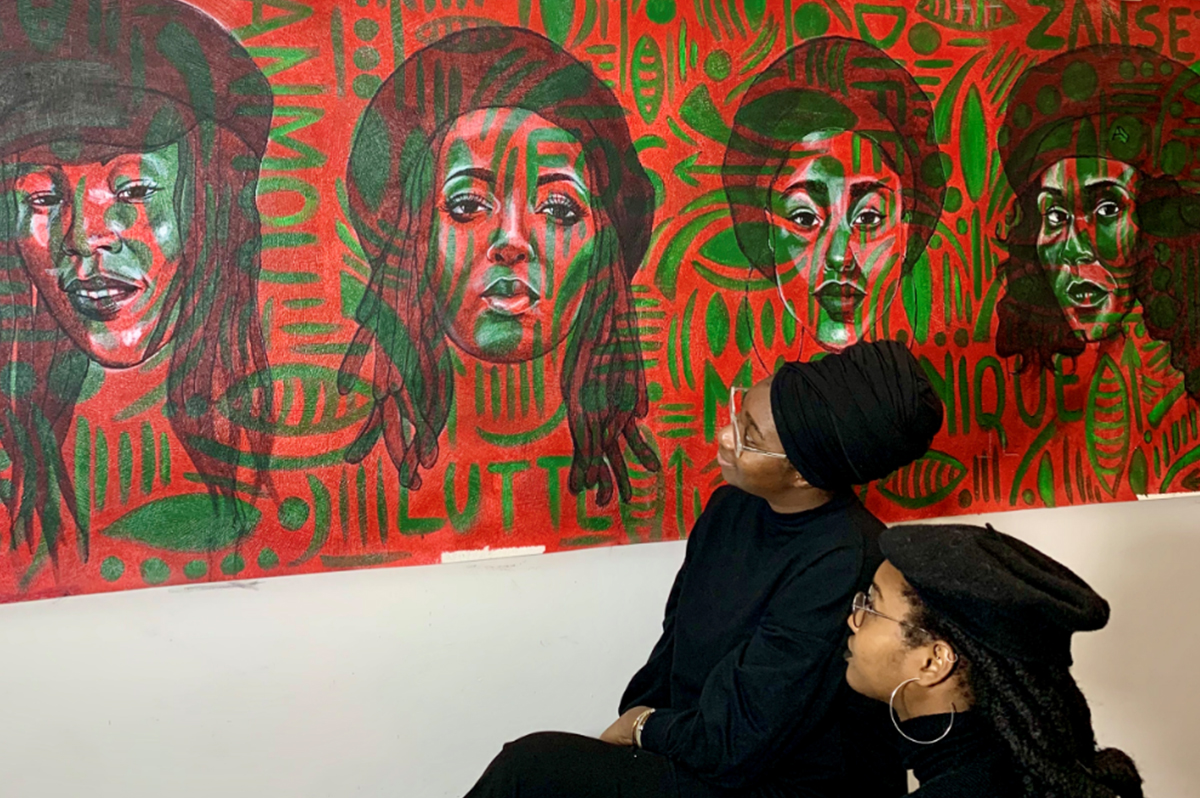 INVITATION TO THE SALY LAB

"To begin with, it all started with Saly's desire to share a space, a support in the name of creation with its "Welcome to my Lab" concept.
This collaboration was first of all born from this friendly artistic relationship with Saly. This was followed by a common desire to share, to help each other and to artistically grow together. That's why, when Saly proposed, I immediately accepted. Without having to think about it beforehand, it just happened naturally."

How to link and interweave the two universes in a coherent and equitable way?
How to give an artistic form to human affinities?

"Admiring Lauwaart's technique and different techniques, I first wanted to get to know his working methods. We discussed a lot about our respective ways of approaching art. I discovered a real discipline, curiosity and versatility in Lauwaart at that time that really inspired me. The idea of collaborating on a piece of work finally came quickly. "
- Saly.D

BIRTH OF THE IDEA

The desire to highlight the activist aspect of Lauwaart's art is linked to Saly's recent need to give meaning to his designs.

"The theme came to me at the same time as the idea of the collaboration. Lauwaart has this ability to transcribe his revolt in his art and I wanted to revive this process.
I wanted to exploit the militant and altruistic dimension of art. Lauwaart seemed to be the right partner for this project. Without playing the role of a doyenne, she reminded me of the one I was in my early days as an artist. The choice to pay tribute to people also appeared to me quickly, Lauwaart evolving in the portrait, it seemed obvious to me to develop our collaboration in this direction.As for the characters chosen, it was above all to inscribe our approach in the current events, to offer our support to those of our generation who take risks to denounce the injustices and put an end to the inequalities imposed on the black people for too long.
Representing these four women was also a desire to highlight the love and solidarity that exists between black women no matter where they come from."
- Saly.D

"Following the agreement of the collaboration, the question we quickly answered was "What do we do?" On his side, Saly knew enough the essence of my art, of my universe. And to this was added his will to push his own universe. For my part, I felt as always the need to illustrate, to honor the people who touch me in one way or another.
Nevertheless, in these particular times between the demonstrations, the trials, and the injustices faced by the young Martiniqueans. And especially the women of my generation on my native land, it was important to transmit love, strength, and to highlight this solidarity, sisterhood so often diminished, ignored or forgotten."
- Lauwaart

"For the love of the challenge, I wanted to be able to combine my work with that of an artist I admire. I had no idea how much would come of this collaboration. I knew that neither of us would "crush" the other's universe because our temperaments did not predict it. However, would we produce a work that had personality? Would we manage to get our message across and understood?"
- Saly.D

"One of the aspects of this collaboration that was most important to me was to respect the world of Saly. Without hiding it, or diminishing it in any way.
The idea was good. But the first technical process that I had in mind certainly allowed the respect of both universes, but at the expense of the final homogeneity of the work. So each one had to adapt according to the needs, and the universe of the other."
- Lauwaart

MEETING AT THE LAB

"For all the collaborations I've done, I wanted a paper support with texture to give depth to our lines. One day I found a large roll of old wallpaper in a hardware store, both sides are nice to paint and the paper was thick enough to support any type of paint.So we decided to work on a kind of frieze composed of portraits and motifs. The big surprise was the size of our work. Representing these 4 portraits was already a challenge in itself, we gave ourselves an extra challenge by working on such a large format."
- Saly.D

"At the first meeting, I discovered the paper support on which we were going to work. And I brought back the colors that we had chosen before the meeting.
At that time, we did not know who would be represented and what the exact dimensions of the work would be. However, we knew that we wanted to represent 4 Martinican women. Because of this, we started by measuring an area for a portrait that we then carried over three more times."
- Lauwaart

"I have always wanted to mix my art with words. But when I decided to focus my art on patterns I didn't know how to combine these two techniques. At the beginning of the collaboration this combination of patterns and words came very naturally, I did some tests on paper beforehand. We thought together about the words we wanted to put on our canvas. These simple words had to go hand in hand with the theme of the work, namely the struggle, the homage to the ancestors, the resistance etc.. The motifs had to be well calibrated so that Lauwaart could make the portraits without being in the way and without the portraits overwhelming the motifs. This adjustment work was done in the beginning, once we agreed on the type of motifs the work went smoothly."
- Saly.D

The cohabitation of the two working methods

"We needed to be able to share our visions in a clear way before the realization of it on canvas. It's cool to be able to talk about it to visualize, but it's much easier to be able to show your vision. It's also a way to get inspired and to build together, and for that, nothing is more practical than digital. So we did color and positioning tests very easily and quickly. Just enough to be able to project each other in the same direction."
- Lauwaart

"With my small sample of patterns that I had made on paper, we then worked with the help of the Lauwaart tablet. This step allowed us to visualize what our common work would become. It was at this point that I discovered a new way of organizing the stages of making a work, and it completely changed my way of conceiving my works. We have, I think, really succeeded in making our universes and our work processes cohabit. My spontaneous side combined with Lauwaart's reflective side and we inspired each other to evolve in our respective arts."
- Saly.D

The first brush strokes of Saly

"Our stages of realization sometimes took place in parallel, sometimes one after the other and at certain moments they intertwined. I never had the impression of working in the same way on this mural. Initially, I was in charge of painting the red background while Lauwaart did his portrait sketches on paper. As we applied the green patterns the first portrait (Mona's) started to appear on the support. We were really excited to see how this project would turn out. We could have waited until the background was completely filled with my designs and Lauwaart had finished drawing all the portraits on paper. But we decided to go with our desires...and our impatience!"
- Saly.D

Lauwaart's portraits on paper and canvas

"Before Saly started painting, we had decided together which women would be represented. Nothing was concretely acted before this discussion.
In this way, while she was creating her designs and giving life to her universe, I was studying the portraits on brown paper, taking care to work out the proportions and determine the areas of light and shadow. Once all my portraits were done on paper, I could start the first portrait on canvas. The one of Mona, then Alexane, then Jay, and finally Cha."
- Lauwaart

"I can truly say that there was a before and after to this collaboration. On an artistic level, I was enriched by this benevolent exchange. Our ways of working fit very well, each one was able to express her universe. I learned a lot of methods and tricks while working with Lauwaart and I am eternally grateful because this collaboration gave a new breath to my creative process. I look forward to the next time. From a human point of view, this experience brought a lot of patience, since it took several sessions to realize the fresco, I had to learn to respect the intervals of creation, the dead times. Good things take time and that's normal! I was able to see the reflection of my moods as an artist through Lauwaart and it's good to know that we are not alone in thinking and reacting in a certain way to our art. Following the publication of the work on our social networks we received a lot of love and support, it transported us and strengthened our attachment to our art that we want to engage."
- Saly.D

I would like to warmly thank Saly for this exchange which was for me full of learning, gentleness, and benevolence. I have more than once called her my mentor (even though she categorically refuses to do so), but I have learned a lot, both humanly and artistically, from this woman and artist. Saly has this strength and mindset that generates movement, action, creation? Everything is opportunity or solution in the benevolence with her, and it is really a thing that I admire in her. To discover Saly's colorful, soothing, and therapeutic artistic universe, go to https://www.saly-d.com/or on his instagram account https://www.instagram.com/saly.d_art/ I can assure you that you will not regret it.

My first cover for Shinin' Kid

Rebel Girls - A magical collaboration, and a must have book!